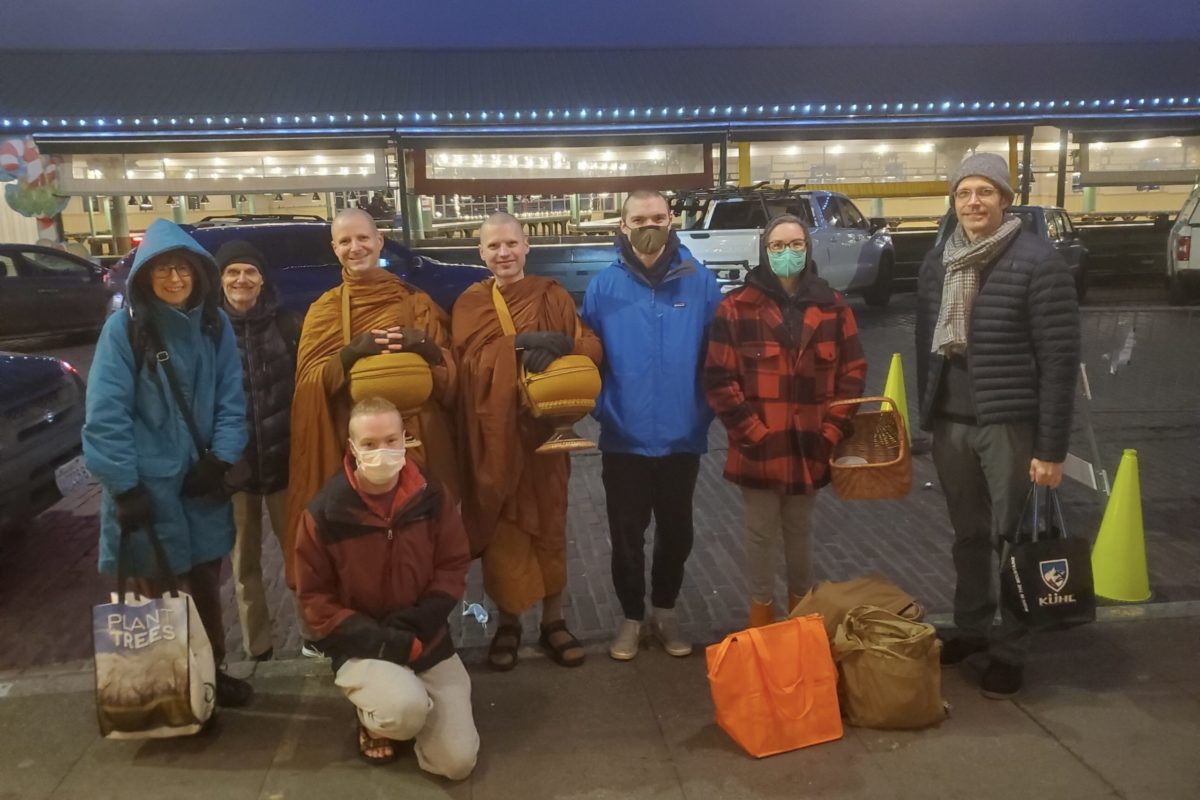 In Pali, there is a specific word for the feeling you get when you see a YouTube video of a five-year old giving his new toy fire engine to a homeless child on the street. It’s the same emotion you get when you’re meditating with your non-Buddhist sibling and you sneak a peak and see that she’s taking it seriously and hasn’t yet fallen asleep. And, it’s the same feeling a monastic feels every time they go for alms.

The word is “pattānumodanā” and it means “rejoicing in” (modanā) “merit” (patta) “along with” (anu) another person. That is, in less parenthetical Buddhist-hybrid English: the goodness and delight one partakes in when recognizing the goodness of others. It is one of ten “basis of merit” spoken of in Pali Commentarial literature and the one Ajahn Jayasaro calls the “lazy-man’s way of making merit” pointing out that, to do it, all you have to do is to delight when you see someone else doing good! It is a bright and joyful mindstate and it is one I experienced in abundance during my recent four-week visit to the Clear Mountain Monastery project.

Every mendicant monastic the world over technically eats “alms” every day – whether they are living alone or in community, are in a monastery or are traveling. There is, however, a felt difference between the experience one has when “going alms” inside of a monastery to a kitchen where lay people reliably make and offer food everyday, and “going alms” outside a monastery where the amount, substance, and even presence of food is not a given. The difference is further the gulf between choosing your own food versus having it chosen for you. At Clear Mountain Monastery, the structure of the daily almsround heaps upon the above mentioned precarities the fact that whatever we are given that morning will be our sole food for the day. As you might imagine, this is a recipe for vulnerability.

This is the context for Tan Nisabho’s weekday almsround into Pike Place Market and it became my reality as well during my month’s visit here to Seattle. Surprisingly, this exercise in disquieting vulnerability is not merely physically sustaining, but is actually psychologically nourishing. And what makes that possible is the pattānumodana that we experience every step of the way both to and from the market – regardless of how much or how little food has been offered.

During my stay, the morning almsround was approximately as follows. The absence of Tan Nisabho in these descriptions is due to his visiting Abhayagiri during the first two weeks of my stay; due to his having sustained a foot injury during the next; and due to his fasting for the last.

Preparation for almsround would usually begin around 5:40 a.m. as I would start adding layers to my minimal, around-the-hut, morning monk-wear. On the first day of the second week of almsround, however, as Seattle temperatures reached a 50-year record low temperature of 17 degrees, I had to begin wrapping myself up about 10 minutes earlier.

I had begun receiving a flurry of compassionate emails the previous evening from well-wishers worrying it wouldn’t be safe to go alms. Having gone alms at the Pacific Hermitage with 3 feet of snow on the ground, however, I wasn’t so daunted. Further, knowing the inner warmth which mounts as one meets radiant smiles and the fervent faith of almsgivers, I had a strong sense that all would be well and decided to trek for alms regardless.

The walk from hut to ferry harbor takes about 15 minutes – a bit longer when there’s 5 inches of fresh snow atop slick ice. I carry my alms bowl in its traditional sling and I wear all three of the monk’s traditional “triple robe set.” Having seen the very first day of my visit how generous Seattlites can be, I also carry a shoulder bag to receive any food donations which might spill out and over the rim of my already ample alms bowl. As it is Seattle, I also, of course, carry an umbrella.

I board the Southworth-to-Downtown Seattle ferry at 6:15 a.m. Already at this predawn hour, I’ve said or waved good morning to quite a few new friends – ferry dock staff, mostly. Though I knew none of them before coming here, it seems that I look enough like Tan Nisabho (at least from a distance … in the snow … when wearing a face mask) to receive their kindly glances and generous hand waves in his stead. Already here, before being given a single morsel of food, the bowl of my heart begins to be filled.

“Welcome! Good morning!!!” Jaysone calls out from a hundred yards away. The operator of the massive dock-lift, she is one of the most gregarious people I’ve ever met. “It’s good to see you! Be safe over there! Will we see you back here this morning?”

“Of course!” I respond with a hidden but reciprocal smile as I board the ferry wearing my monk-brown face mask.

For the next 20 minutes, I simply sit on the ferry. And often, that’s all I do: simply sit. To feel okay about eating food we didn’t “work” for, monks do the “work” of Dhamma – cultivating stillness and trying to see clearly. To feel joy in doing what seems like begging, monks beg the question of themselves: how well am I spending my time? To delight in others’ gifts of faith, monks try to make themselves worthy objects of that faith. And when these paradoxes find synergy, pattānumodana is the result: we can rejoice both looking within and looking without.

When the often choppy ferry ride concludes at Coleman Dock, the next leg of the sojourn commences as I walk the eleven downtown blocks through corridors of upscale skyscrapers to Pike Place Market. In this icy season, there are fewer ramshackle tents lining the streets than there had been five months earlier when I first visited Tan Nisabho in the summer. Still, not a day went by that I didn’t pass many such living and breathing encampments and have some interaction with those living their.

Through these meetings and through being the recipient of spontaneous gifts from some of them, a profoundly curious question frequently arose: if they’re the ones who are giving, who’re the ones who are poor? After that first day of icy roads, we were quickly given Yaktrak ice cleats to keep us from slipping, but when I received a granola bar and a bag of nuts from a hunchbacked woman whose broken-teethed smile beamed back at me, my heart teetered. As she placed them gently in my hands, she said, “Somebody gave me these, but I don’t need them. Can I give them to you?” And then, with a twinkle in her eye the size of Olympia, she was gone from sight … but not from mind.

According to the Clear Mountain Monastery website: “On weekdays, food offerings may be made during the alms round from 7:10 – 7:40 am near the Pike Place Market Starbucks.” So, although I will have already witnessed a dozen acts of kindness by that time – a time when many or most Americans have barely gotten out of bed, the “official” time for offering has only just begun.

And so, outside Le Panier Bakery, I stand with my alms bowl. In the words of the monastic training rule, I wait with “downcast eyes,” humbling myself to the compassionate notice of strangers. The downcastness of my eyes, however, is paired with an upwelling in my heart as I spend the moments between interactions and the spaces within conversations reciting a mantra of wakefulness: “Bud-dho. Bud-dho. Bud-dho.” Alternatively, a monk – though somber and austere in appearance – may be inwardly wishing “Sukhi hotu! Sukhi hotu! Sukhi hotu!” – “May you be happy! May you be happy! May you be happy!” with each and every breath.

Like the breath, each and every day on alms is unique. Though Tan Nisabho has set up a fantastic almsround calendar where people can and do sign up to either donate food in person at the market or to send food directly to our Southworth huts, these names-on-a-Google-calendar – apparent certainties – do not tell the whole story.

The whole story is more fully fleshed out when we meet these names in person and hear their stories and reflect together on Dhamma. The name “Beth” on the calendar, for instance, would not have prepared me for her moving words about waking up that morning before 5 a.m. to begin preparing food and how each step in the food prep was real “practice” equivalent, in her mind, to preparing food for the Buddha himself. Her delight that, “I just love making food for monks!” was both contagious and humbling. That, is pattānumodana: practicing transmissible joy.

To list the names of those who offered me alms – Dave, the Meyers, Jeremy, Daniel, Denis, Sujata, Job, Kim, Aek, Steve, Jason, Dee – is to recollect the residual afterglow of our mutually supportive interactions. Weeks after being given a burrito, pattānumodana keeps on giving. Honestly, it is almost certainly a universal monastic experience to be able to vividly recollect specific examples of being on the receiving end of another person’s generosity. A case in point is Luang Por Sumedho’s famous story of a toddler being held in his mom’s arms and being prompted to give away his lovely apple to this large monk, and inwardly going back and forth about the decision, but finally, triumphantly, and with smiling exuberance putting the apple into Luang Por’s bowl.

On a clock, only thirty minutes have gone by. But in the heart, many moments stand still – luminous. I do, however, have to keep one eye on my watch as I have an 8:05 a.m. ferry to catch back to Southworth – home of my sweet monastic retreat. And, if I don’t catch that ferry, I somewhat irrationally fear that I’ll befall some Cinderella-at-midnightesque fate.

At 7:40, I begin my walk back to the ferry past the weathered tents. Pretty much everyday, my bowl has been blessed in the past half hour and, on occasion, I am able to complete this pattānumodana-circle by giving an extra biscuit or a banana to someone here who needs it more than I do that day.

Giving more eye-smiles to the ferry operators, I return to Southworth, and, when ashore, am greeted once again by Jaysone. “Welcome back! Have a great day!!!” Though my bowl and often my shoulder bag have put on weight during this return trip, my walk seems lighter and my spirits have invariably been buoyed up. My mantra seems to sing itself and hope for humanity has been restored for another 23 hours.

I arrive back to my hut in Dave and Alison’s backyard. I doff my extra robes – often wet from snow or rain. I prepare my bowl. I set up my mind. And, alone after my morning’s adventure into uncertainty – my introvert’s trip into extroversion – I chant the traditional “Anumodana” verses:

Just as rivers full of water, entirely fill up the sea,
So will what’s here been given bring blessings to departed spirits …
For those who are respectful, who always honor those worthy of honor,
Four are the qualities which will increase: life, beauty, happiness, and strength.

Though you know it already, that is how pattānumodana feels. It is the spiritual joy which wells up and overflows you when you witness humanity’s goodness. And, as the chant says, it bestows meaning to life, inner beauty, sustainable happiness, and inner strength.

Anumodana to everyone who offered me alms. I hope the experience was as filling for you as it was for me.