An Architecture of Faith: Clear Mountain’s Search for a Home 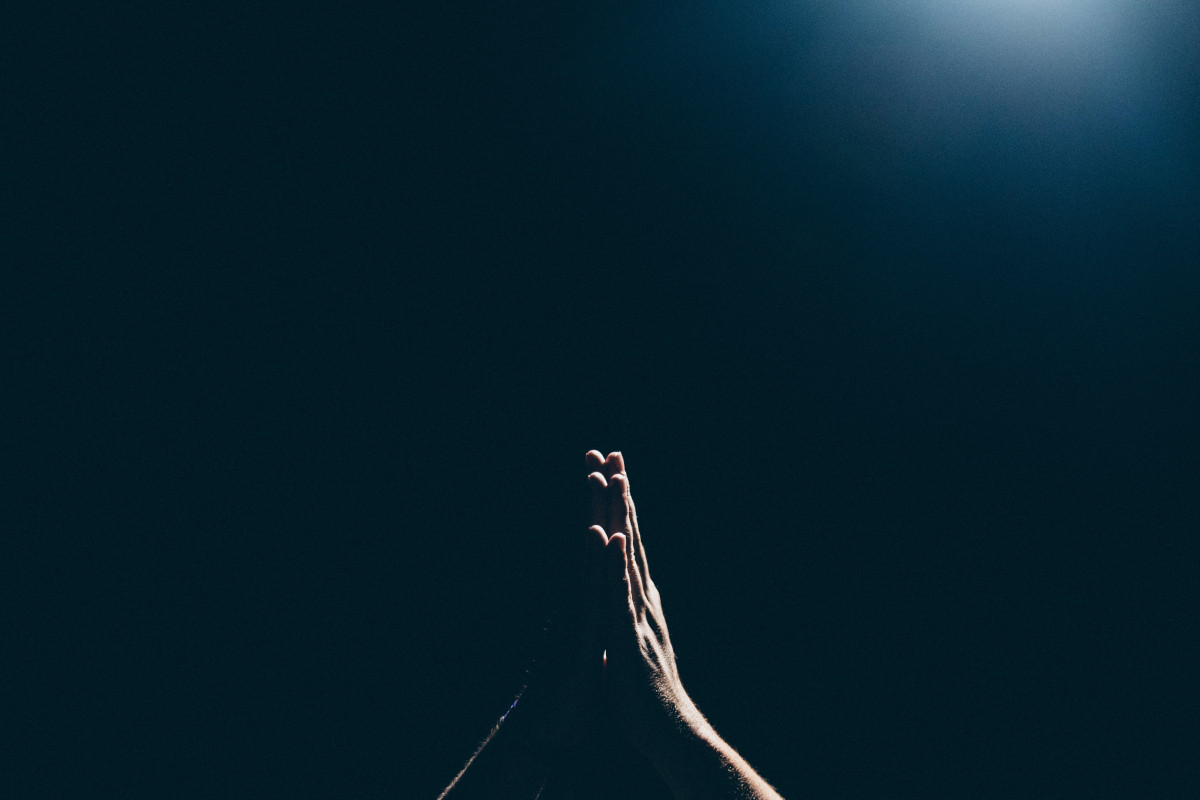 Clear Mountain’s first year-and-a-half gave rise to a community inspired by the shared vision of a monastic presence near Seattle. We look now towards finding a physical home for the monastery and the refuge it might become for all who need it.

In 2007, Gene Weingarten, a renowned journalist with the Washington Post, conducted an experiment in which Joshua Bell, one of the world’s foremost violinists, dressed in jeans and stood in the foyer of a D.C. subway to see if he could reach people through the morning commute. Just three nights before, Bell had filled Boston’s Symphony Hall, and the Stradivarius he held was valued at $3.5 million. In the experiment’s video, most commuters walk past without a second glance.

“You find yourself thinking that he’s not really there. A ghost.” Weingarten later wrote, “Only then do you see it: He is the one who is real. They are the ghosts.” After a time, the tragedy is softened by a woman holding a plastic bag stopping to watch, her attention calling a few others to do the same. The world swirls around them.

Sammā, the prefix adorning each factor of the Noble Eightfold Path, is often translated as “Right”, leading to translations of “Right View”, “Right Intention”, and so on. Yet the word also means “harmonious”, describing the felt sense of life lived toward Awakening and a pure melody we may align with—the Dhamma.

Watching people begin to hear this note in their lives and meditate, read teachings, and gather for practice, is like watching that first woman stop in the middle of D.C ‘s subway. To practice Dhamma in line with Dhamma”—Dhammānudhammappaṭipadā—in the Buddha’s words, takes not only sensitivity to a deeper truth, but a refreshing boldness. Those who halt to listen to its melody are changed.

Over the past year, I’ve watched time and again as people turn toward this note, meditating daily, gathering Saturdays on Capitol Hill, and beginning to intuit something precious.

One woman, who two years ago winced at the overly-spiritual flavor of her mother’s, “Bless your heart!” now cries at the memory of meeting Ayyā Anandabodhi, a visiting bhikkhuṇī from California. “The year since I began practicing has been the best of my life,” she said,  looking down as she spoke, “It’s felt like falling in love.”

A counselor who took a month to serve Ayyā Medhānandī at Sati Sārāṇīya Hermitage in Canada, returned to wake at 4 a.m. every day so she might have time to meditate and read teachings before work. “It let my heart open,” she smiled, “But of course, then you have to enter the world with an open heart.”

A realtor who inaugurated her encounter with Dhamma last year by reading the 800–page biography of Ajahn Chah, underwent surgery last winter. During the months following the operation she joined Clear Mountain’s Wednesday Zoom sessions from her bed, forehead knit with pain, but eyes bright with those onscreen.

For many, the tune of Dhamma has overwhelmed all else and led them to seek ordination. Last winter, one community member quit his job, left for Temple Forest Monastery in New Hampshire, and intends to go forth next spring. A young graphic designer traveled to four different monasteries this past year searching for a place to ordain. Her voice catches when she speaks of becoming a nun.

In September, a 30-year old software engineer laughed as he told me he’d lost his job, the company’s layoffs coming just before he’d planned to hand in his two-week notice. Soon afterwards he sent me a picture of a calendar with post-it notes representing the days left until most of his possessions were given away or sold, his townhouse signed over, and his journey to become a monk started.

Over the past year-and-a-half, Clear Mountain’s Saturday gatherings have grown from five people in Lincoln Park July of 2021 to 65 hosted by Saint Mark’s Cathedral this past month with another 50 joining via Zoom and YouTube. Over 100 have joined the online Upāsakā group, committing to the Five Precepts, daily meditation, optional weekly Uposatha days of practice, confession, and sutta study.

The community has taken in bright-eyed bank employees, recovering veterans, and many who feel their lives, though externally settled, lack a purpose worthy of the Dhamma’s profound note. Sitting meditation quietly in Amistad School each Saturday morning, they seem to be listening to something together in the silence. 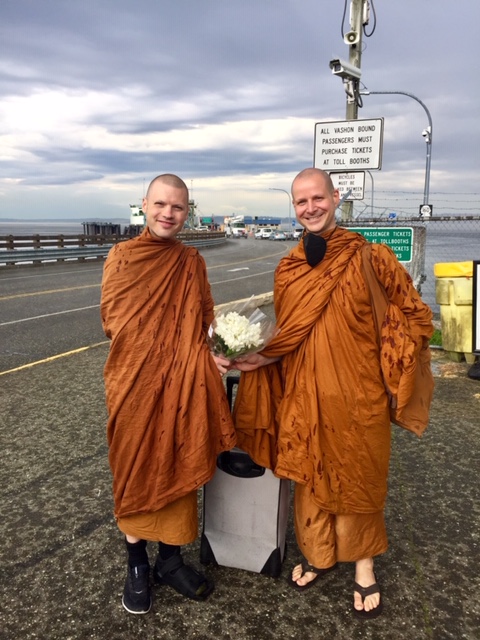 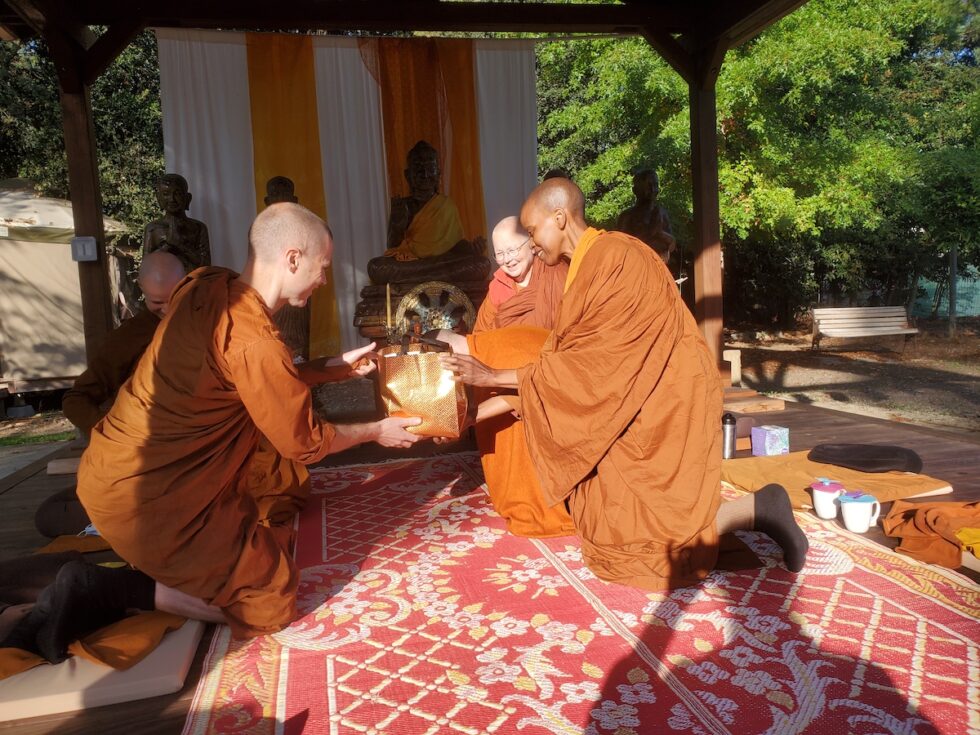 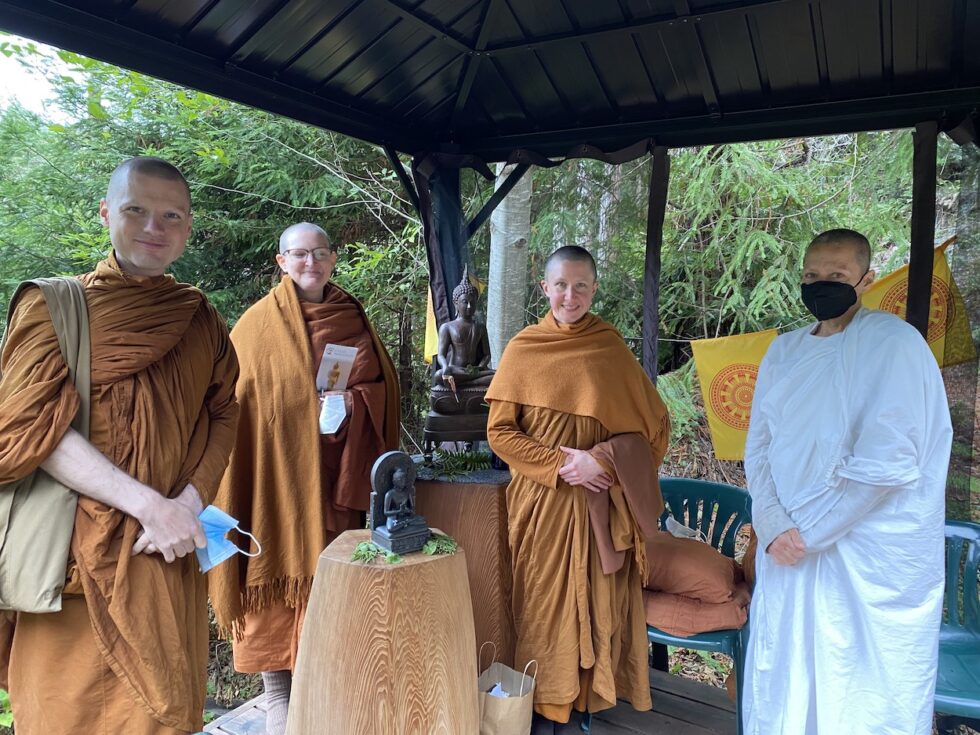 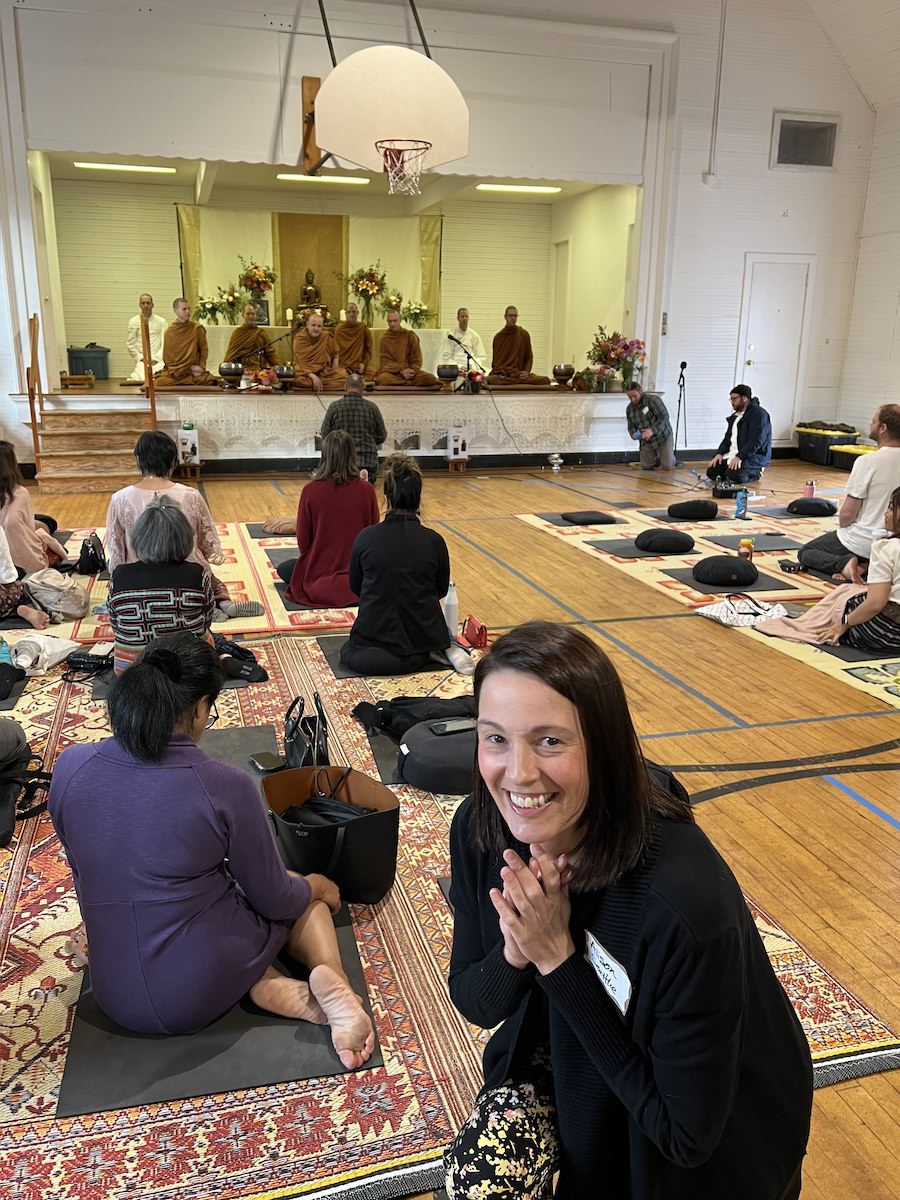 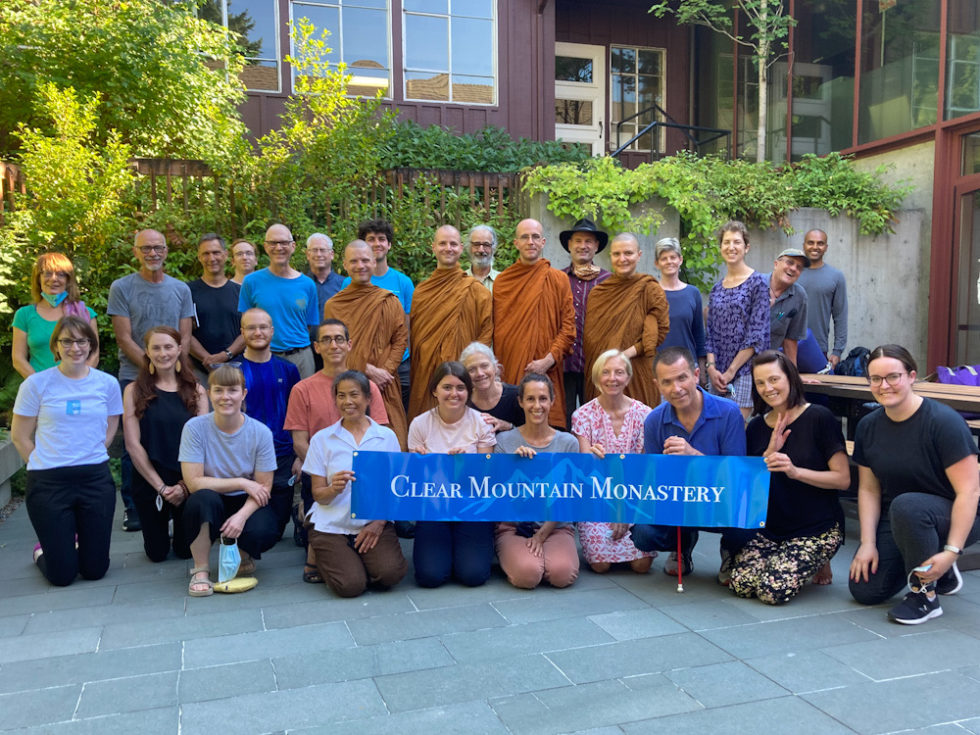 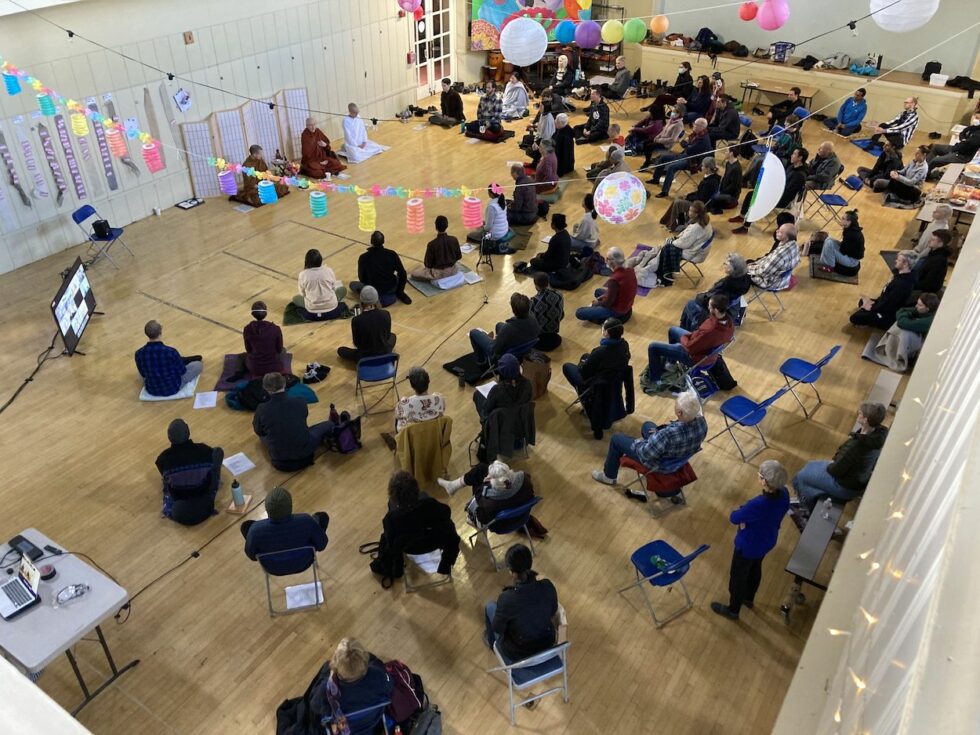 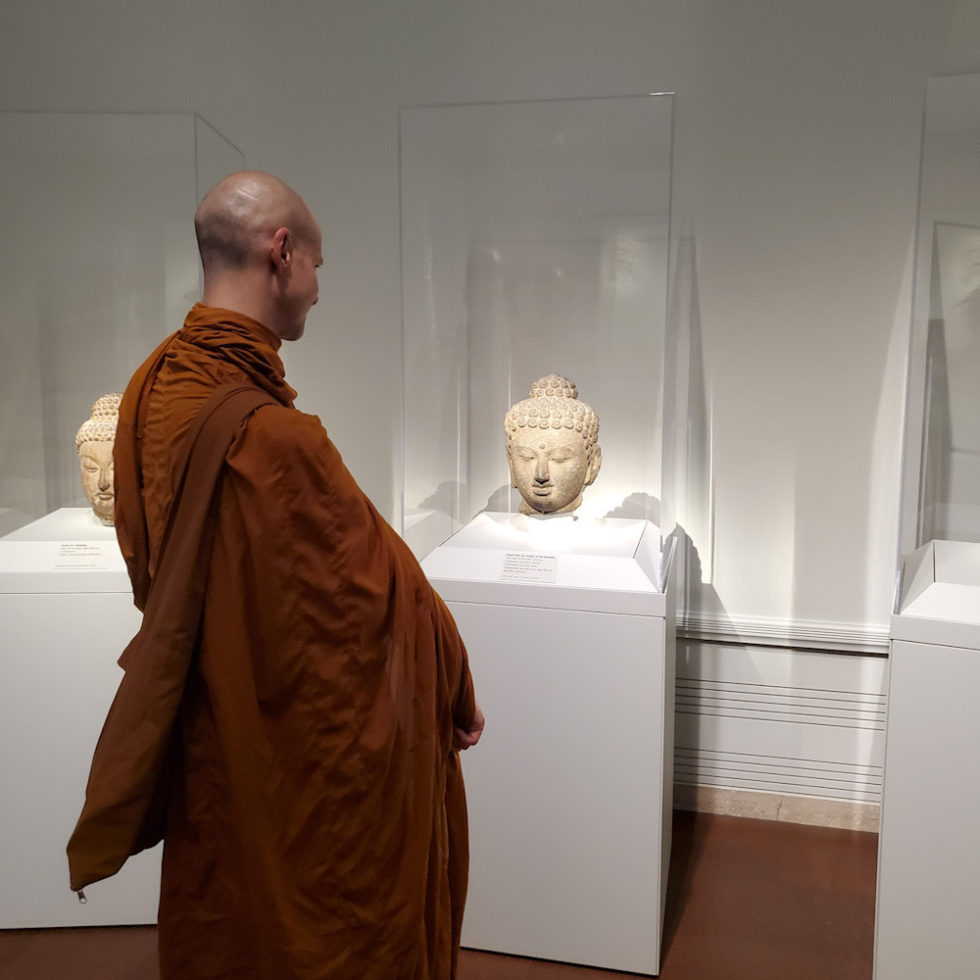 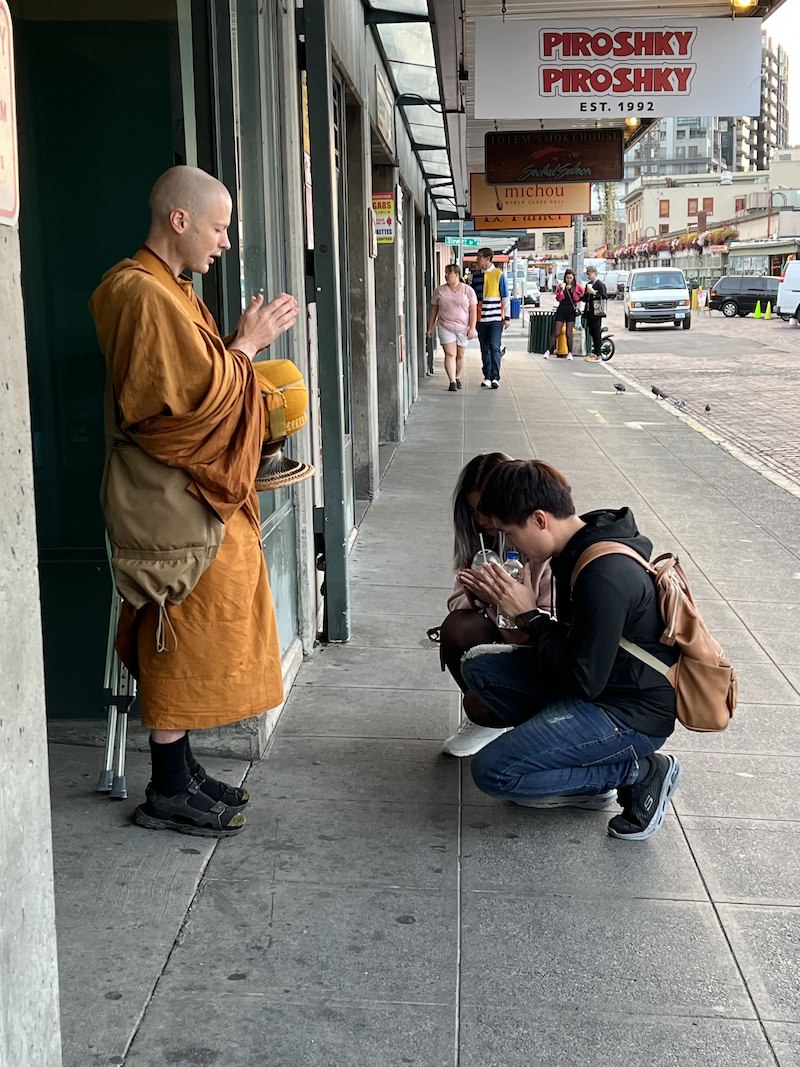 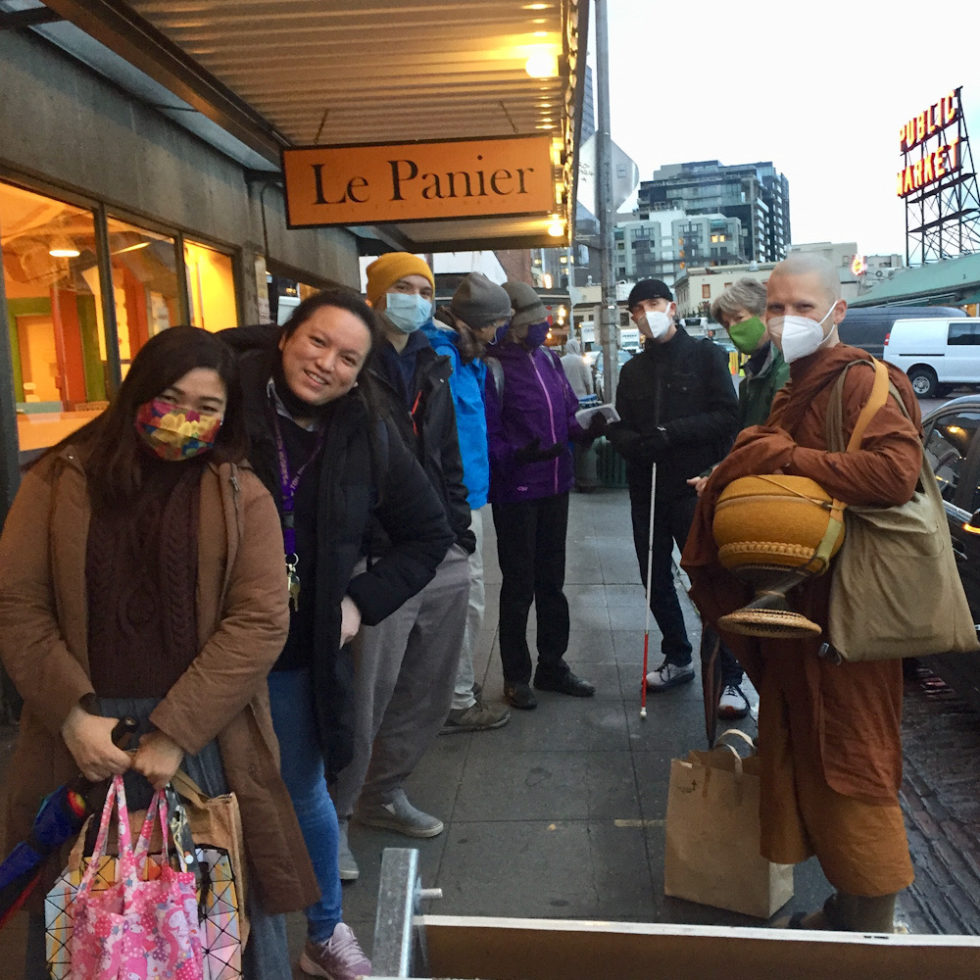 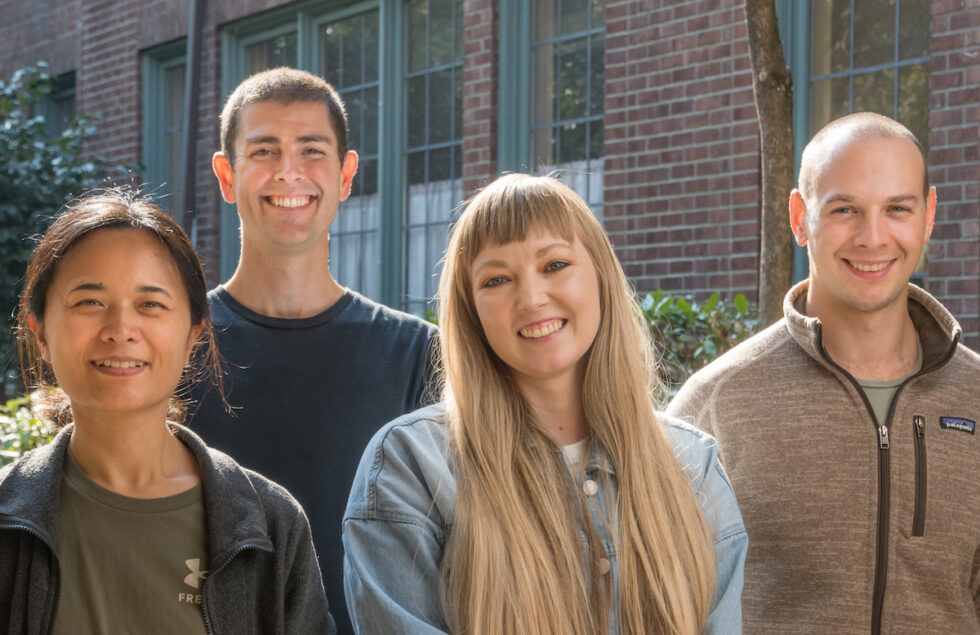 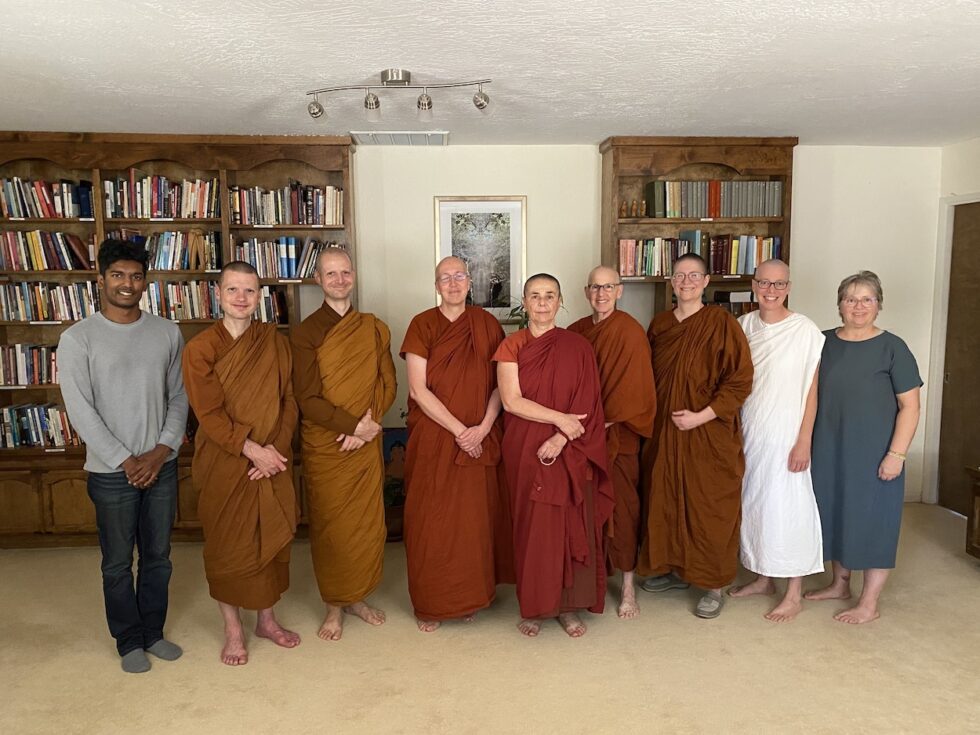 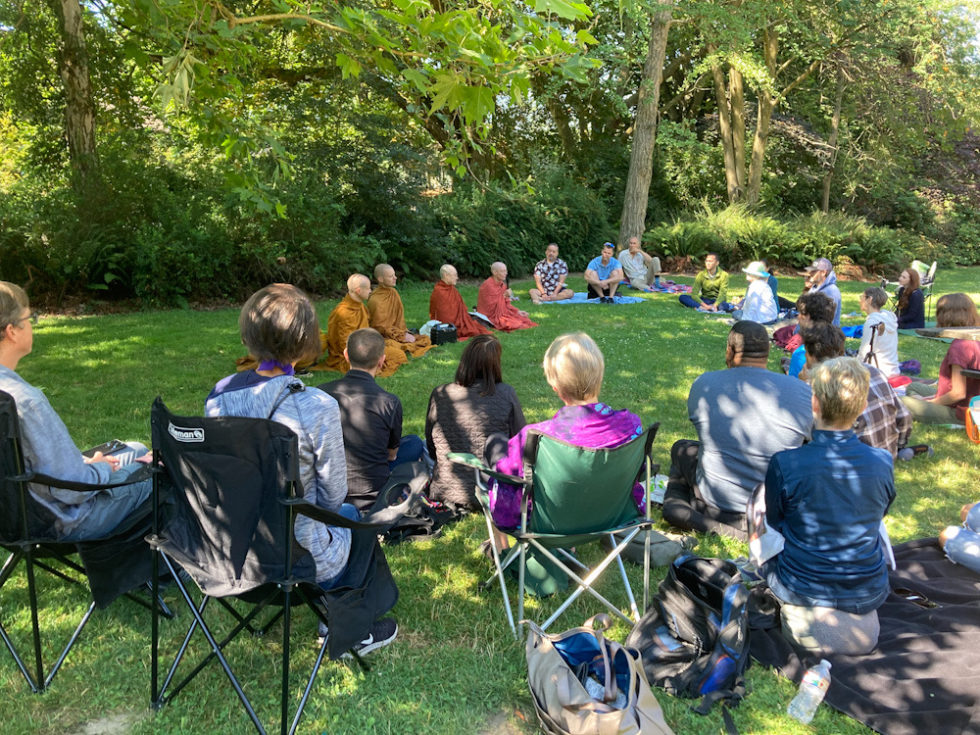 Photos of gatherings, visiting teachers, and a budding faith that’s grown over the past year. You can see more photos here.

It is hard to resist the world’s currents for a music few around us seem to hear, and our coming together reminds us of others who value the Dhamma’s melody. Weekly gatherings allow this to some extent, but the Dhamma deserves a resonant architecture. When Bell played at the Music Center at Strathmore, the standing audience stifled coughs to better honor the same music that was lost in the city’s subway. The Forest Tradition is a restrained genre; its quiet notes should echo through pine.

Last month, Clear Mountain formed a Land Search Committee with the goal of finding a large piece of forested property no more than an hour from Capitol Hill. The land might be as small as 10 acres if bordered by protected forest, but would have to be significantly larger if not so bordered, to protect it from suburban encroachment. To allow the monastics to continue their daily alms round, the property would hopefully be within three miles of a store or place to walk for alms, with a body of water or stream, existing structures, and access by public transport useful but not essential.

While senior monks and nuns have counseled us against a dual-gender community, Ayyā Santussikā and Ayyā Cittānandā, bhikkhuṇī advisors to Clear Mountain, have suggested that such a large plot of land would allow room for accommodations where female monastics might visit and stay, allowing the Fourfold Assembly of monks, nuns, laywomen, and laymen, to gather and perhaps catalyze a sister community in the area.

Clear Mountain’s primary concern is to provide a home for resident monastics and their practice. Monks’ ability to seek daily seclusion, go on retreat for several months every year, and find nourishing silence for study and meditation, will always form the project’s heartwood.

However, a monastery need not choose between serving as a home for monastics and a refuge for laity. When its monastics are not on retreat, Clear Mountain’s intended proximity will allow those in and around Seattle to come daily, before or after work, and join the monastery’s activities, and also allow access to a diversity of socio-economic class and age not found in remote areas. Additionally, many community members expect to move near the monastery, making its rhythm their own, and some have begun to discuss co-housing.

Before work each morning, practitioners living nearby could come sit, speak with the monastics, and share a meal, and in the evening, visit for tea, remaining for evening chanting and meditation. Once every week, as is tradition, the monastery would hold an all-night vigil of meditation and Dhamma talks until the early hours of morning, a procession of candles and flowers ringing the hall on holy days. The gardens, library, and meditation hall might stay open throughout the day to those seeking quiet, as long as monastic seclusion remained protected. Huts and rooms would be available for lay guests to stay for days, weeks, or, in the case of long-term lay stewards, months.

Everything, from books to lodgings, teachings to meals, will be offered freely in the spirit of Dhamma. The monastery will be sustained, as such monasteries have since the time of the Buddha, simply by the generosity of those inspired to give.

This is a grand vision, but one the world deeply needs, and supporting conditions have begun to coalesce. Clear Mountain Monastery and its steward organization, Friends of Clear Mountain, received official 501(c)3 status this past month as a tax-exempt non-profit, providing the project with an essential legal foundation. Additionally, those in the community continue to give every day, in large and small ways, and current and pledged contributions have reached several hundred thousand dollars.

Over the coming year, we will work with other religious organizations and realtors to find suitable properties in the forested areas north, south, and east of Seattle. In order to include the wider community, we plan to provide regular updates and hold tri-annual “Visioning Meetings,” during which the Land Search Committee may speak about their progress, answer questions, and hear the hopes and perspectives of others in the community. The first such meeting will be held Sunday, Jan. 8th at 3 p.m. on Zoom.

The gathering of resources and search for property, however, are only external manifestations of the internal qualities that must nourish and guide this project, and these remain our priority.

This December, over 30 members of the community will travel on pilgrimage to Thailand and India, setting the project’s intention at the feet of the masters and roots of the Bodhi Tree. We will bring back teachings, a clearer vision of the tradition’s source, and knowledge that the aspiration has been planted under the shade of Bodhi leaves.

On New Year’s Eve we will come together for an all-night vigil to celebrate the past year and to set our aspiration together for the future. The evening, held in-person at Fauntleroy Church in West Seattle and online via Zoom and YouTube livestream, will feature meditation, monastic teachings, reflections from those just returned from Thailand and India, and traditional chanting of 108 Itipi So homages. We will also distribute Clear Mountain malas made in strung in Bodh Gaya and touched by senior teachers in Thailand, and such malas will be available upon request to those not present. Apart from allowing those unable to go on pilgrimage to receive its blessings, the night will begin a new phase in Clear Mountain’s journey: our search for a home.

Finally, over the coming months, Clear Mountain’s global community will begin gathering its voices together, aiming to accumulate 10 million traditional Pali “Recitations of Refuge,” and dedicating them to all sentient beings and to Clear Mountain’s future home. The parikamma, or meditation object, “Buddhaṃ saraṇaṃ gacchāmi, Dhammaṃ saraṇaṃ gacchāmi, Saṅghaṃ saraṇaṃ gacchāmi,” meaning “To the Buddha… Dhamma.. and Sangha I go for refuge,” is often recited under one’s breath or silently throughout the day and counted on a string of mala beads. The recollection of the Triple Gem serves as an object of mindfulness, and a catalyst for joy.

In lamenting the Joshua Bell experiment, in which almost no one in the subway seems to understand the beauty echoing around them, one can overlook what happens when someone does. One woman’s stopping halts others, and they stand together like pillars of an unseen temple, its structure suddenly visible amidst the morning commute.

Each member of the community represents one piece of a manifesting architecture. In the stance of a college student returned from Abhayagiri this month determined to ordain, I see the dignity of columns; a young girl’s palms press together in prayer like vaulted beams; as an older woman prepares coffee before Saturday’s meditation, her laugh rings through the gathering light, bright as the garden she might yet tend.

May we honor the Dhamma we have been blessed to hear with the work of our hands. May we together create a refuge for all who need it.