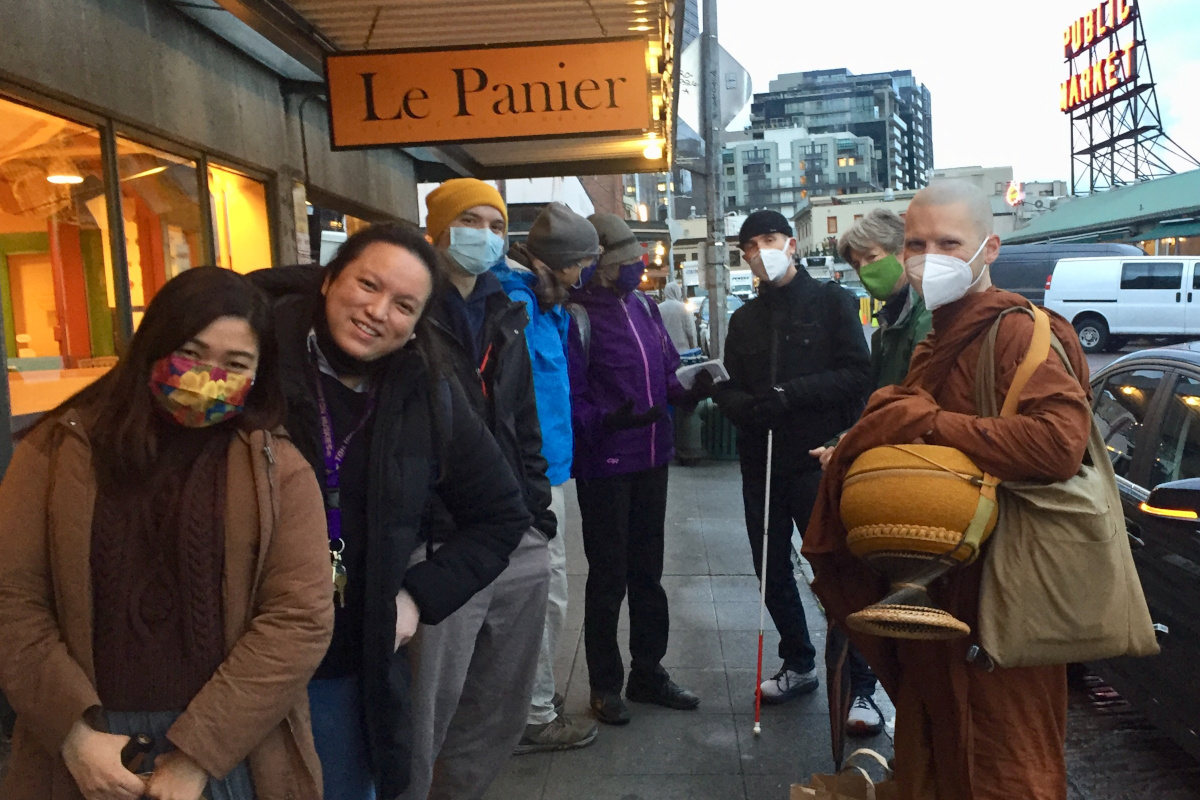 Members of the community come to meet Tan Nisabho during his daily alms round at Pike Place Market in late November.

Autumn came with a middle-aged woman who sat down with us one Saturday morning at a cafe and began to speak about her daughter’s death. The mornings had just begun to smell of woodsmoke and maple, and the jingle of passing dogs’ collars rang in the new cold.

Six of us sat outside a coffee shop with hands wrapped around paper cups before the weekly Saturday morning meditation at Saint Mark’s when Isabella began to speak. Just arrived from Abhayagiri where she’d been staying for the past several months, she had spent the previous seven years since her daughter’s death immersing herself more and more deeply in the Dhamma.

“I just realized that nothing else mattered in the same way anymore,” Isabella’s consonants lilted in the Italian accent of her home, and her hands moved with her words, “The death came out of nowhere and left me with only this as the center, and I’ve been traveling to monasteries for a while now. I had to leave Abhayagiri as my visa expires tomorrow, so now it’s off to Canada and then Amaravati to seek ordination.”

Like the season, Isabella’s aspiration represents an archetypal moment of change and letting go of the old, and her words echoed those spoken by Siddhartha Gotama, Ajahn Chah, and every sincere monastic I have ever known. They contain the voice of the young woman, Katie, who two weeks after attending one of our gatherings, decided to quit her job at an advertising firm to explore monasteries along the West Coast. They sound similar to those spoken by four young men who drove with us to visit Ajahn Pasanno at the Pacific Hermitage in October, interested in ordination. To hear them spoken aloud is rare, and each rose from her like steam from the coffee wrapped in others’ hands.

“I feel like a flower whose petals have all dropped,” she later said, her voice softening, “Only the center remains, and you don’t have to water it anymore. The process occurs all on its own. The Dhamma rises from the ground.”

Over the past few months, many in our community have shed the old for the sake of greater ripenings. Several have quit jobs or given notice in order to explore ordination. One moved out of his house into a van in order to save money, find time to practice, and have a platform from which to visit monasteries scattered throughout the U.S. Others have taken gentler steps of relinquishment in their life, leaving home for a week to visit Abhayagiri monastery, or simply giving up their usual Saturday morning routine to come to Saint Mark’s for the weekly sit.

Suffering, the Buddha taught, could give rise to two reactions: bewilderment or a search. Perhaps our most fundamental decision in life is whether to look at each of our autumns as a time of withering, or as one of harvest. Sometimes, however, the snap of cold precedes the apple’s fullness. Love fades, a friend dies, or fire burns to within a half-mile of the property, and we must decide whether to consider ourselves victims or students of what lesson, and even gift, may be hidden within.

Such understanding allows us to reframe our suffering not as an obstacle to practice, but as an opportunity to develop wisdom and compassion, and an encouragement to set our hearts on what transcends the shifting aims given us by society. In a sense, the world is falling apart in its eagerness to reveal what lies underneath.

The spiritual impulse in our society that Clear Mountain is part of emerges from just such moments of suffering on a societal scale. In June 2020, 40 percent of U.S. adults reported struggling with substance abuse or mental health issues. The College Health Association found that in 2019, 45 percent of American college students felt “so depressed it was difficult to function,” and 65 percent experienced “overwhelming anxiety.”

Each morning as I walk for alms in downtown Seattle, I pass the stained nylon tents of those who have nowhere else to go, and the city’s spirits stir below the grey. A friend told me during a visit several weeks ago that seeing the news each morning, she doesn’t know how to think of the future–her face clouded like the smoke that rose from the inland forests all August as they burned.

Yet, in the same moment, interest in mindfulness and meditation have surged. Since 2012, the number of people practicing meditation in the U.S. has tripled. 7 percent of children now meditate and, in 2018, 52 percent of employers provided mindfulness classes or training to their employees.

After an interfaith dialogue we had one Sunday, Rev. Thomason, the pastor who invited our group to meet in Saint Mark’s for our weekly meditation, surveyed those present to see how many might be interested in joining the group as a way to supplement their centering prayer practice. Three-fourths raised their hands. As the narratives and structures of the past century decay, we are forced to look for an older, more sustaining one.

Clear Mountain hopes to embody this not just for those who have ordained as monastics, but for the wider lay community. In the short term, the project will likely continue to consist of me, and frequently Ajahn Kovilo or another monk, staying on the periphery of Seattle with those who have offered to host us. As the community grows, land may eventually be offered and a permanent residence for several monastics take root. Such land would need to be accessible via public transport, allowing people to easily come visit and resident monastics to go for alms every morning.

The monastery could eventually host several long-term stewards who could help receive and look after laity who came for retreat. Those men and women who wished to stay would be welcome to remain as long as they wanted, participating in the daily life of the monastery and dedicating their time to practice.

This model, inspired by Birken Monastery in Canada, would allow Clear Mountain to serve as a refuge for the wider lay community while still preserving the autonomy and practice of the resident monastics. In the spirit of the Buddha’s teachings, all lodging and teachings would be offered completely free of charge, the project sustained by generosity alone.

Those practitioners I’ve spoken to over the past few months have expressed, time and again, their hunger for a way to bring their lives more in tune with the Dhamma. More than anything, this is the gift of a monastery. There is a place in the Pacific Northwest for a project like Clear Mountain, and if we cultivate it carefully it will grow.

Autumn’s harvest comes slowly; its roots reach through loss into the soil’s deeper warmth. Yet what fruit emerges from tangle and taproot may sustain through winter, and if our eyes darken with the season, we only have to remember the seed of bright intention we together now hold in our hands.

P.S. – For inspiration, words from Katie, who left her job in October to explore monasteries:

I miss the community and look forward to hearing how everyone is doing and if anyone else has taken any big steps on the path! Please continue to share anything you’d like about my journey. I recently inspired a Dhamma friend to go to Aloka Vihara next month and it’s bringing me so much Mudita. More people going to monasteries and listening to their hearts = more Mudita!

I really don’t think there’s anything that’s ever felt so right in my life as taking this time away to explore the Dhamma. I can already feel things slowing down, and my heart and energy feel cleansed from being done with my job at my former company. Feel free to include my name and whatever information you want that I shared. If I inspire a single person to go do something similar, that would make me so happy.

I just wrapped up two weeks at Aloka Vihara and go into retreat at Spirit Rock on Wednesday. Even after only two weeks, I can say that this is the best thing I’ve ever done in my life and I have zero regrets.

My time with the ayyas, the nuns,  cannot be conveyed over a simple email, but my practice and faith have deepened in ways I could never have expected. I now have a much better understanding of the joy of serving others, of dana, so much so that I’m going to serve the final four-to-five weeks of their winter retreat in March/early April, which is the biggest honor.

I hope more people from the community will go and do something similar as soon as possible, if their circumstances allow of course. I can’t think of a better possible way to spend one’s time and I’m glad I didn’t put it off any longer.